Teams in Seattle and Cleveland are pursuing an ambitious experiment to regenerate crucial cells and create a new therapy model. 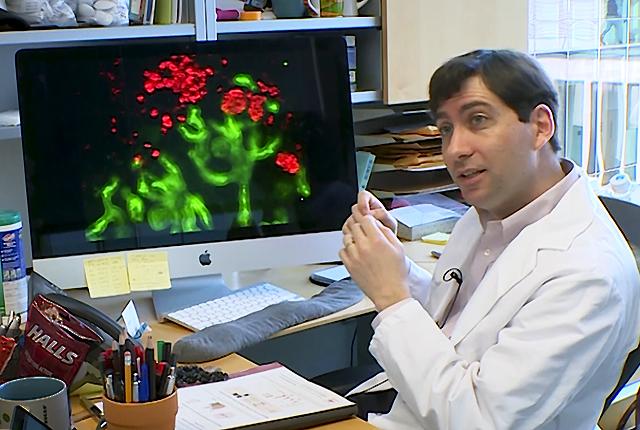 Benjamin Freedman describes the kidney podocyte cells, in red on his screen, and the green tubules to which they are attached.

UW Medicine scientists are driving a bold, multi-partner experiment to stimulate the repair and regeneration of human kidney cells. A favorable outcome could jump-start a new therapy model for 850 million people worldwide who live with kidney disease.

The National Institutes of Health recently announced the project’s funding: $4 million over five years. The study focuses on regenerating cells in the glomerulus (glow-mare-you-luss), a blood-filtering structure whose function deteriorates in most kidney conditions. Even though glomerular disease can take years to develop, in many cases people are constantly losing precious podocytes – the filtering cells of the glomerulus – faster than they can be replaced. 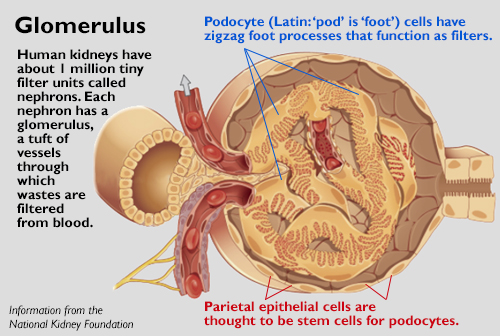 In trying to bolster podocytes’ numbers, the researchers face formidable scientific hurdles, said Benjamin “Beno” Freedman, an associate professor of medicine (nephrology) at the University of Washington School of Medicine. “Our four teams will all need to be on our ‘A’ game,” he said.

Investigators in Seattle and Cleveland

Oliver Wessely’s group at the Cleveland Clinic will develop one or more novel therapeutics to augment podocyte cells. Podocytes are injured in many kidney diseases and cannot self-renew. Wessely’s team aims to identify molecules that help injured podocytes recover and also increase the population of nearby parietal epithelial cells, which are thought to have capacity to become stem cells that transform into podocytes.

Jim Roberts’ team at Lumen Bioscience in Seattle will create one or more novel nanobodies, or antibody fragments, to deliver the new therapeutics directly to podocytes and parietal epithelial cells. Essentially Lumen is building a ‘self-driving vehicle’ programmed to deliver its passenger therapeutic to specific cellular addresses.

Freedman’s lab will develop kidney organoids, miniature complex structures of cells that model kidney function. These will grow in a dish for 21 days and then be implanted into mice. Freedman expects that, over a span of weeks, the organoids will grow into tissue resembling a human glomerulus. “To study glomerular disease, we need it to be a mature piece of tissue in a living organism. The tissue will be partially human and partially mouse,” he said.

Mice carrying the hybrid tissue graft will subsequently be injected with the therapeutic-carrying nanobodies and observed for changes to human podocytes. In parallel, the Shankland Lab of UW Medicine nephrologist Dr. Stuart Shankland, will study effects on these treatments in mice whose natural kidneys have glomerular disease.

It will take a month or two to know whether the therapeutic-carrying nanobodies are going to the right place, Shankland said.  “We will color-label the nanobodies and if they go where we want them to go, we’ll be able to see it.” 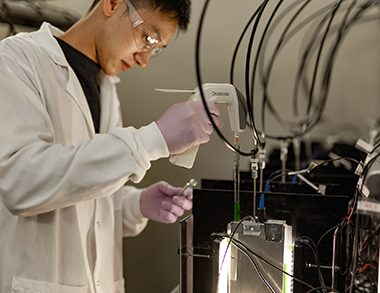 The researchers are confronting several unknowns. For example, although studies suggest it is likely, it's not known for certain that human parietal epithelial cells transform naturally into podocytes. Whether that process can be actuated by a therapeutic is another uncertainty.

It’s also unclear that a nanobody can wend its way through mouse bloodstreams to reach specific kidney cells.

“Nanobodies are perfect for this application because they naturally localize to kidney very quickly after systemic injection,” said Roberts, of Lumen Bio. “If the nanobodies can bind to the specific stem cells in the kidney, they can be used to deliver activating drugs to those cells.”

If the researchers successfully augment human podocytes in the tissue grafts in mice, “that would give us substantial reason to believe that same therapeutics would be effective in people,” Freedman said. He described podocytes in a 2018 video.

[Editor's note: The illustration of the glomerulus was originally created by OpenStax College. It is reused and adapted under the "Creative Commons Attribution 3.0 Unreported" license.]

Kidney on a chip animation.jpg